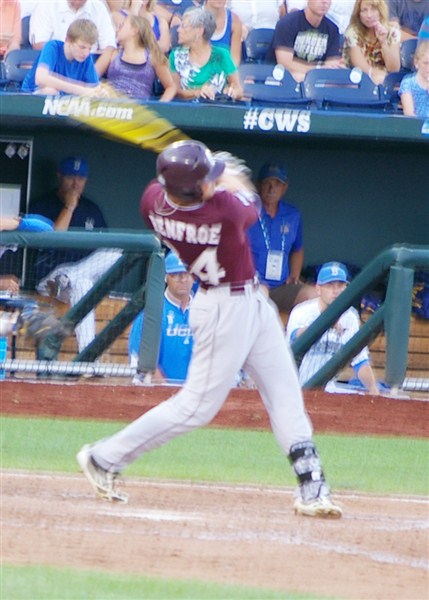 Miss. State’s Hunter Renfroe fouls off a pitch in Game 2 of the NCAA Men’s College World Series Championship against UCLA on Tuesday evening. The Bruins won 8-0.

Hometown hero Hunter Renfroe’s stock rose even higher after the Mississippi State junior outfielder blasted a 3-run home run in the bottom of the fifth with two outs as the Bulldogs beat Oregon State 4-1 last Friday.
The Bulldogs were nursing a 1-0 lead when Renfroe’s 16th homer of the year, only the third in the entire College World Series, gave the Bulldogs the cushion they needed. State’s bullpen, magnificent all year, made it hold up the rest of the way as the Dogs improved to 3-0 and secured a spot in the CWS finals.
The 21-year-old Crystal Springs resident and Copiah Academy alumnus was the 13th player chosen overall in the first round of the recent MLB draft by the San Diego Padres. He is projected to receive upwards of $2.6 million as a signing bonus.
The dramatic win over Oregon State pit MSU against UCLA in a best-of-three series that began Monday night to determine the champion of this year’s College World Series. In that game, the Bulldogs’ magic ride hit a bump as the Bruins edged MSU 3-1 to take a 1-0 lead in the best-of-three series.
UCLA scored once in the top of the first and added two more runs on a two-out single in the fourth to go ahead 3-0. After the base hit, Renfroe fielded the ball in right field and threw behind the runner, allowing his teammates to tag the Bruin out in a rundown for the third out. State got on the scoreboard with a run in the bottom of the inning thanks to a bases-loaded walk, but that was the only run the Dogs could manufacture the entire evening.
MSU fans got a scare in the bottom of the eighth when Renfroe, who was 0 for 3 officially, was hit on the front shoulder by a pitch that was high and inside. However, the Crystal Springs native shook it off and stayed in the game, though he was cut down in a double play. To their credit, the Bulldogs threatened in the bottom of the ninth, but left the tying runs on base as they failed to score.
UCLA won Game 2, 8-0, and took home the national championship trophy.  Miss. State players arrived in Starkville on Thursday at Dudy Noble Field to a rousing ‘thank you’ from around 3,000 fans.