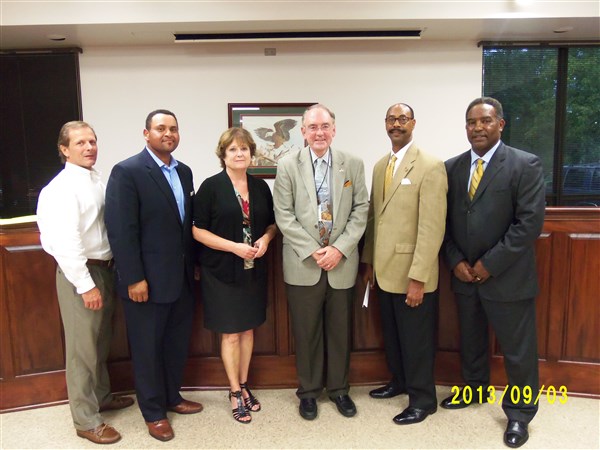 By Bonnie L. Jackson
News Editor
A delegation from the  Mississippi Department of Education including Rep. Greg Holloway met with Mayor Henry C. Banks and the board of Aldermen to discuss the state’s road map for reconstituting the Hazlehurst City School District (HCSD) back to the City of Hazlehurst.
The meeting took place as part of the city’s regular monthly board meeting held on Tuesday night, September 3, at 6 p.m.
Dr. Larry Drawdy navigated a fine line between excitement for the community and the need to stress the importance of getting this right.
According to Dr. Larry Drawdy,  the city leaders received a letter from the Mississippi Department of Education officially stating MDE’s intension to reconstitute HCSD back to the community.
“We are here tonight to talk to you about the process you will go through in selecting the school board members for the Hazlehurst City School Board. I cannot emphasize the importance of this. Mayor Banks and I about this past week and how important this is. Government Bryant has issued a proclamation stating that there is no longer an emergency in the HCSD and a need for the school takeover,” stated Dr. Drawdy.
Rep. Greg Holloway spoke to the commitment of community leaders and Governor Phil Bryant. “Whatever you make think about the political arena, I want to thank the governor for his leadership because without his leadership this would not have been possible. I do not compromise my integrity. I do not compromise my commitment and I will not compromise my philosophy, but I believe in working within the system. Party affiliation does not matter. I believe in working within the system. The governor is a friend of mine, and he has been a friend of mine before he became governor. He worked with us diligently to get this done so whatever you think about the governor you can think the same thing about me because I appreciate so much of what he has done. He thank Mayor Banks and the board for their leadership.”
Dr. Drawdy defined the steps: Mr. Henry Dorsey was appointed as the conservator for the school district; MDE will walk you through the procedure for selecting the school board; the role of the conservator and the school board will be explained; school board training will be required; and also the selecting of and securing a superintendent the Hazlehurst school district.
Dr. Drawdy informed the board of the new law that was enacted in 2012. “There is an important piece of legislation that has just recently been passed by the Mississippi legislature and Rep. Greg Holloway is keenly aware of this.  This new legislation  requires the abolishment of a school district once it has been taken into conservatorship, if by chance,  it has to be taken over again. Abolishment simply means that the district would be abolished and would be merged into other school district in the surrounding  facility.”
Kathy Boteler is the representative from the  Attorney General’s office, but works out of MDE, informed the board of their options if the worst case scenario should happen again. “The law provides that if a subsequent emergency is declared the board has a set of options: either establish a conservatorship or abolish the school district  and administratively consolidated the school district with one or more existing school districts or reduce the size of the district and administratively consolidate parts of the district.”
Read more in this week’s edition of the Copiah County Courier
Posted in News