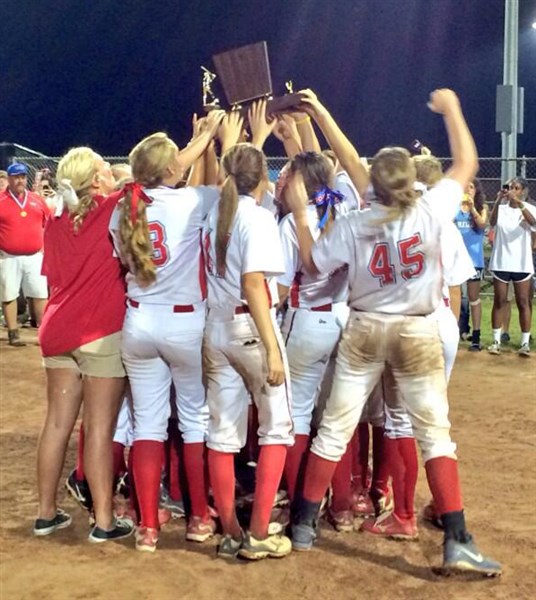 Do you believe in miracles? Lady Colonels rally to “THREE-PEAT!”

Whew! Anyone who was at Monday evening’s MAIS AAA state championship game between Copiah Academy and Parklane Academy won’t soon forget it! The Lady Colonels showed why they are state champs for the third straight year as they rallied for 5 runs in the bottom of the 7th inning to overcome the Lady Pioneers 6-5 in Pearl.

“Lord, yes, this was the toughest one of the three (championships)!” said an emotional Terry Bauer after his team’s dramatic win. “That (Parklane) is a great team, and they play with heart just like us.

“I told our girls before we batted in the seventh that it starts with everybody and nobody makes an out,” he continued. “I told them to strive for the best – to do your best. Our girls play with so much heart. They win in all kinds of situations. The Lord has blessed me to let me be here. You don’t come across groups like this very often.”

The dramatic ending came as CA fought its way back through the losers’ bracket after a heartbreaking 7-6 extra-inning loss to Parklane that morning. Facing elimination, the Lady Colonels edged Magnolia Heights Academy 4-2 on Kelly Byrd’s walk-off 2-run HR with 2 outs in the bottom of the seventh. Copiah followed that dramatic win by edging its season-long rival, Parklane, 4-1, forcing a second game with the Lady Pioneers.

Parklane scored once in the top of the first on Mik Smith’s RBI-single, however CA tied the score as Jordan Jones led off with a single and later scored on Byrd’s RBI-double. Leadoff hitter Destini Brown’s RBI-single in the top of the second put Parklane ahead 2-1, and the Lady Pioneers increased their margin to 5-1 in the third, thanks to Taylor Murray’s solo HR and Kaylin Coney’s 2-run single.

The score stayed the same even though CA threatened several times – that is, until the Lady Colonels’ final at-bat. Victoria Allen led off with a walk, Cassidy Brown followed with an infield single, and Kaylie Carpenter reached on a bunt single, loading the bases with no outs. An illegal pitch allowed one run to score, making it 5-2, and Jordan Jones’ RBI-single drove in another run before Kamryn Vanlandingham rapped a 2-run single that tied the score 5-5.

With the winning run on third, Parklane’s Hannah Moak was forced to walk Byrd and Tayor intentionally, setting up a force at home. However, with Lindsey Walker at bat, Moak uncorked a wild pitch, and Vanlandingham slid home with the winning run, giving the Lady Colonels their third-straight state championship.

“It was great!” said Kaitlyn Taylor, winner of 20 games during the season and the lone senior player on the team. “I knew the whole time we were going to win. I have faith in my team ‘cause we stick together.” She is hoping to continue her career at Copiah-Lincoln Community College and later at Belhaven University.

With the victory, Copiah finished the season with a 33-4 overall record. It was the 400th career win for longtime CA head coach Terry Bauer. Ironically, he would not have gotten it this year had not the Lady Colonels fallen into the losers’ bracket.

Earlier in the week, Copiah beat Jackson Prep 14-5 at the South State Tournament in Flowood. Kaitlyn Taylor (17-2) was the winning pitcher and helped her own cause with 6 RBI’s, thanks to a double and a grand-slam HR. Jordan Jones had 2 hits and 2 RBI’s for the winners, while teammate Victoria Allen had a pair of hits, including a leadoff double in the fifth. Lindsey Walker chipped in with a couple of singles.

Heavy rain forced the cancellation of the remainder of the South State Tourney, so the teams were sent to the State Tourney based on their rankings and the games played at South State: Copiah 1st, Parklane 2nd, East Rankin 3rd, and Jackson Prep 4th.

Last Saturday, the Lady Colonels began defense of their state title by walloping Pillow Academy 12-2 in Pearl as Jordan Jones (6-1) pitched a 3-hitter and helped her own cause with 2 RBI’s and 3 hits, including a leadoff triple in the bottom of the first. Kaitlyn Taylor had 3 doubles and drove in a pair of runs for CA, while Lindsey Walker and Victoria Allen each contributed a couple of hits. Kelly Byrd blasted a 2-run double for the winners, while Kelli Berry also drove in a pair of runs.

Later Saturday, Copiah scored 2 runs in the bottom of the fifth and nipped Magnolia Heights 5-2 in Pearl. Kaitlyn Taylor (18-2) was the winning pitcher and drove in 4 of CA’s 5 runs, 2 of them with a double in the bottom of the first and 2 more with a single in the fifth. Kamryn Vanlandingham and Kaylie Carpenter each had a pair of singles for the winners, while Byrd and Walker each had a double.