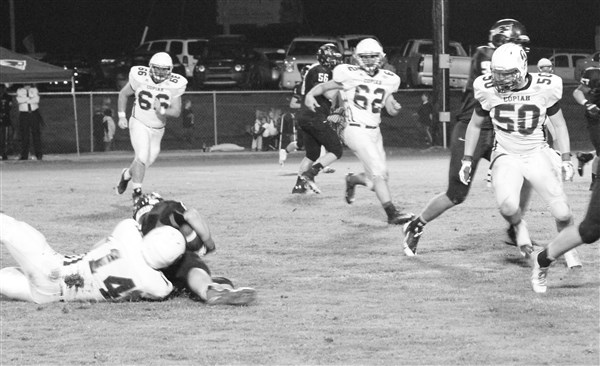 GOT HIM! Copiah Academy’s Thomas Roberson, (14) brings down an East Rankin ball carrier during last Friday night’s game in Pelahatchie. Other Colonels on the scene are Brady McCardle (66), Colton Meadows (62) and Trent Boone (50).

The Copiah Academy Colonels arrived in Pelahatchie with an identical 1-8 record as East Rankin. But after four quarters and the longest halftime show of the season complete with fireworks, CA still had only one victory following a 25-15 loss at the hands of the Patriots.

Copiah took the opening kickoff and picked up a couple of first downs while consuming nearly four minutes. Unfortunately, a dropped pass in East Rankin territory forced the Colonels to punt on fourth down.

The Patriots began from their own 21-yard line. After ER quarterback Hayes Roden connected with Tanner Guy for a 16-yard gain, Guy had 13 and 10-yard runs, respectively. A 14-yard burst by John Bailey Cooke gave East Rankin a first-and-goal at the 6-yard-line. On the very next play, Cooke ran right, took a pitch from Roden, and scored. Greg Nickles kicked the PAT, and East Rankin led 7-0 with 5:30 left in the first period.