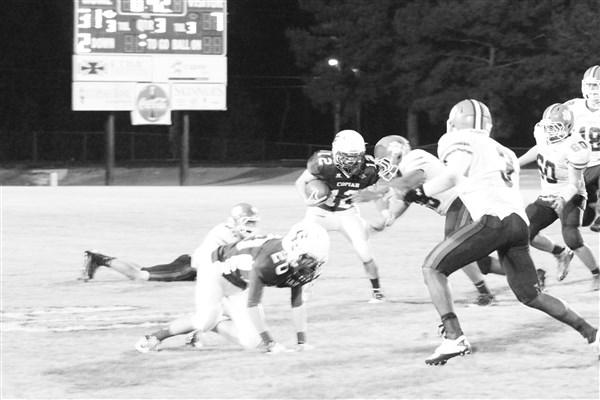 Copiah Academy saved the best for last. This past Friday night, the school observed Senior Night, the Marching Colonels gave another stellar halftime performance, and CA alumnus Hunter Renfroe was on hand to have his jersey retired. But best of all, the Colonels (2-9) outscored the Columbia Academy Cougars 45-29 in the season finale.

“It was good for us,” Copiah head coach Scotty Cline said afterwards, “especially for our seniors. We needed it bad. We had a bunch of big plays, including some big throws from Ryan (Drew). We got a turnover about 2 minutes before halftime and scored, and then stopped them. That just about broke Columbia.”

Neither team could move the ball until Copiah’s Syrshawn Fitch ran 27 yards and 17 yards, respectively, to give his team a first down at the Columbia 26-yard line. Two plays later, Justin Edwards broke through the middle for a 25-yard touchdown. Abraham Handal kicked the PAT, and the Colonels led 7-0 midway through the first period.

The Cougars’ Dylan Martin intercepted a CA pass and ran it back to the Copiah 21 with just over 2 minutes left in the quarter.     Seconds later, quarterback Wiley Cleland completed a pass to P. J. Hammond at the one, setting up Caleb Batie’s TD plunge on the next play. Logan Cooke nailed the PAT, and the score was tied 7-7 with 1:49 left in the opening period.
Fitch ran the ensuing kickoff back to the 40. Two plays later, he raced 27 yards to the Columbia 31. The Colonels worked their way inside the 10, but couldn’t punch it in and had to settle for Handal’s 22-yard field goal and a 10-7 lead early in the second quarter.

Copiah got the ball back late in the half when Justin Edwards recovered a fumble deep in Cougar territory. On the very next play, quarterback Ryan Drew handed off to Fitch, who tossed a 16-yard pass to Peyton Murphy for a touchdown. CA faked the PAT as the holder, Drew, took the ball and passed to Murphy for the 2-point conversion and an 18-7 lead.

The Colonels got the ball back with under 2 minutes remaining in the half, and struck quickly. Pass completions to Edwards and Kyle Drew set up a 43-yard TD pass from Ryan Drew to a wide-open Justin Morris. The PAT was wide right, and CA led 24-7 with just over a minute remaining. Columbia threatened in the waning seconds, but the Colonel defense stopped the Cougars three times from inside the 5-yard line to maintain their 24-7 margin at halftime.
In its first possession of the third quarter, the Copiah offense continued to press the action as Drew connected with Murphy for a 29-yard pass play to midfield. Three plays later, Drew launched a 40-yard pass to his younger brother, Kyle Drew, who took it to the Columbia 15. After Fitch picked up 5 yards, Drew tossed a 10-yard TD pass to Murphy. Handal added the PAT, and CA led 31-7.

Thomas Roberson intercepted a Cougar pass at midfield, which resulted in Johnny Causey’s 4-yard TD run early in the fourth period. Roberson kicked the PAT, giving the Colonels a 38-7 lead. However, the fireworks were just beginning. After Copiah’s Michael Cliburn recovered a Columbia fumble, the Colonels gave it right back on the next play, setting up Cleland’s 3-yard TD run. Cooke booted the PAT, cutting the lead to 38-14 with just over 7 minutes remaining.
Seconds later, Dylan Martin recovered another CA fumble, setting up Cleland’s 28-yard TD pass to Hammond. Batie ran for the 2-point conversion, and the Cougars trailed 38-22 with 5:46 left. Moments later, Copiah iced the game on Causey’s 19-yard TD run that gave his team a 45-22 lead. Columbia managed to tack on another score in the final minutes as Cleland connected with Hammond for a 73-yard bomb.

The Colonels outrushed the Cougars 316 yards to 148 yards. Leading the way were Syrshawn Fitch, who gained 95 yards on 14 carries, and Johnny Causey, who picked up 83 yards on 12 carries. Meanwhile, Ryan Drew completed 8 of 14 passes for 189 yards. Defensively, Adam Day led the way for the winners with 7 tackles, followed by Justin Edwards and Thomas Roberson with 6 apiece.