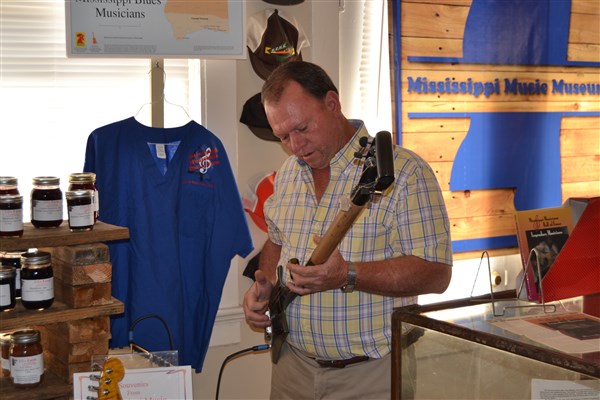 Roger Berry performs on a guitar he made from a shovel at the Mississippi Music Museum grand opening on Saturday, May 17. 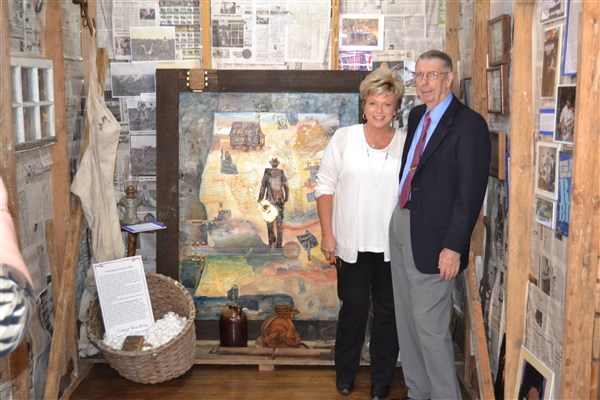 It was music to the ears of several local movers and shakers on Saturday, May 17,when  the Mississippi Musicians Hall of Fame opened its second of three museums in Hazlehurst at The Depot Museum, located on Ragsdale Avenue, with a grand opening and ribbing cutting ceremony.

“Our first museum has been open for 10 years at the Jackson Evers International Airport. All three of these museums honor our great musicians and our state’s musical heritage,” said Dr. Jim Brewer, Mississippi Musicians Hall of Fame Founder and Chair.  “This one is very special to me because we were able to place it here in Hazlehurst,” he added.

Around 100 enthusiasts of Mississippi’s music-ranging from blues to country to rock ‘n roll – turned out for the event and were amazed at the work done on the museum.  Roger Berry, owner of Mississippi Blues Guitars, worked closely with Dr. Brewer and donated his time and effort to build the displays inside.  “We couldn’t have done this without Roger and without the many other donations of time and money,” Brewer said Saturday.

Music tourism is popular around the country, and indeed, around the world. Blues enthusiasts travel from all around the globe to Copiah County, for example, to take in all they can about Robert Johnson, the Hazlehurst native who is considered to be King of the Delta Bluesmen.

The museum contains memorabilia from all ages and all genres of music, not just from Mississippi, but also from around Copiah County. Local musicians honored include former New Orleans entertainer Babs Wood of Hazlehurst and the late Robert Johnson.  Elvis Presley even has his own impressive display.  The museum contains several interactive video screens and antique concert posters.

An artist from Alabama made a surprise contribution on Saturday, hauling a 4-foot by 8-foot painting on old boards of the musical heritage of the state.  Shawnna Harmon arrived just in time for the ribbon cutting ceremony and had help from several men placing her tremendous art in the center of the museum.

Berry donated several of his cigar box guitars and even performed briefly on a guitar made out of a shovel.  “I’ve always enjoyed creating instruments.  One day I picked up this shovel and wanted to see if I could create an instrument out of it.  It turned out pretty good, don’t you think?” Berry asked.

The roots of the museum can be traced locally to the first Stampin’ Stompin’ Blues Festival, which was held in Hazlehurst in September of 1994.  Wood, who was president of the Hazlehurst Area Chamber of Commerce at the time, worked closely with Hazlehurst Postmaster Anna Coates to organize and put on the event held at Lake Hazle. The two even persuaded the U. S. Postal Service to commission a stamp in memory of Robert Johnson.

These museums are funded without the use of state or federal funds. Each has relied on the “creative economy” in creative funding ways and volunteer efforts. The Mississippi Musicians Hall of Fame in its 20 years of operation has been successful in bringing to the attention to the public that Mississippi is the birthplace of America’s music. The third museum, Mississippi Music Experience, will open soon in leased space at the Iron Horse Grill in Jackson.