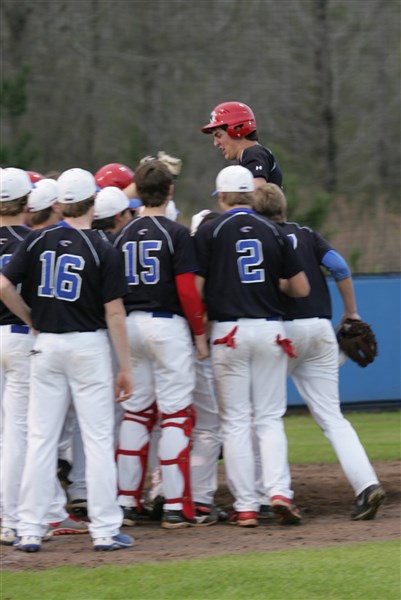 BRIGHT SPOT – Copiah’s Will Lingle is congratulated by his teammates after hitting a home run in recent game action. (Photo by Crockett Action Shots)

Copiah pitcher Noah Chapa all but dominated the Jackson Prep Patriots last Tuesday at Gallman in a 3-1 loss.  Chapa held the highly-ranked Patriots to just 4 hits, while striking out four in a six-inning appearance.  Colton Meadows came in to pitch the top of the seventh for CA, allowing a hit and recording two strikeouts.

Prep’s only runs came in the third inning after a Copiah error, a base hit and a sacrifice fly.
Copiah got its run in the bottom of the seventh.  Ryan Drew reached on a dropped third strike, then later scored on a single by Will Lingle.