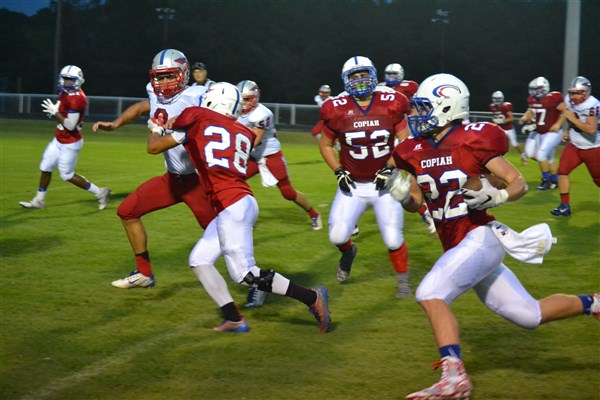 GETTING THE EDGE – Copiah running back Landon Murphy (22) turns the corner for a big gain against Glenbrook School on Friday. Murphy’s run was aided by good blocking from Johnny Causey (28), Cameron Malone (52) and other teammates. Muphy accounted for two scores in the 58-7 win. Copiah faces Hillcrest on Friday at Gallman in the division opener for both teams.

The homestanding Colonels of Copiah Academy scored four times in the first quarter and ran away with a 58-7 win over Glenbrook (LA) School on Friday night to open the 2015 football season.  The margin of victory was the largest in quite some time for the Colonels and allowed for  quality playing time for many of the underclassmen.

“I thought our effort was outstanding for the whole four quarters,” said head coach Paul Anderson.  “We had great preparation all week and probably our best pre-game.  We had this look in our eyes that I haven’t seen before.”