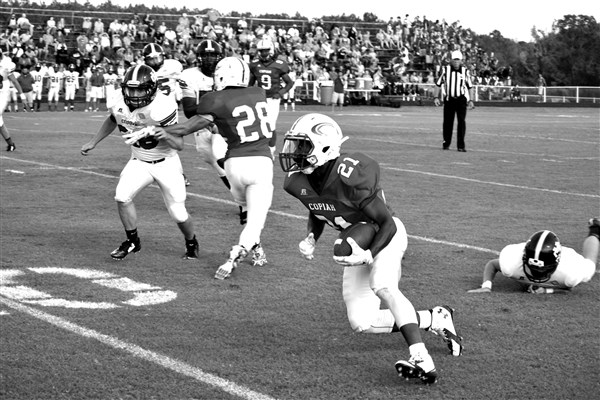 A HELPING HAND – Miquell Powell (21) of Copiah Academy darts around the block of teammate Johnny Cause (28) for a nice gain early in the Colonels’ 37-22 win over the Hillcrest Cougars. Copiah is 2-0 and travels to Natchez to face the Trinity Saints on Friday. (David Brunt)

The Copiah Academy Colonels learned at least two things in their 37-22 win over the Hillcrest Christian Cougars last Friday night.  Firstly, they learned that winning means playing all four quarters as hard as you can play.  And secondly, the Colonels learned that Hillcrest was not going to go quietly into the night after Copiah had built a 17 point lead late in the second quarter.

“I was proud that our guys stepped up and kept the heat on Hillcrest in that second half,” said Copiah head coach Paul Anderson after the win.  “They have a team that never quits, but we proved tonight that we do too,” he added.