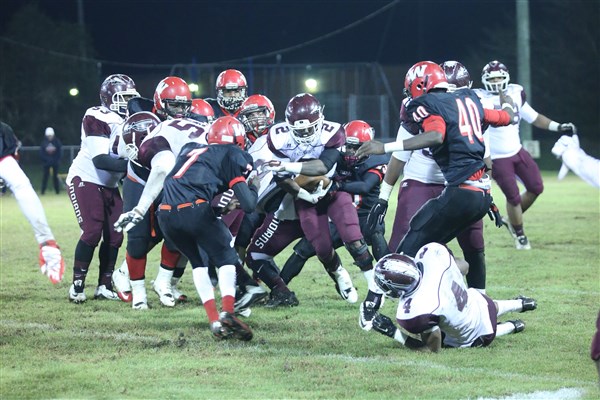 Anfernee Jordan (2) finds the going tough as he is surrounded by West Marion defenders on Friday night. (Crockett Action Shots)

Hazlehurst came up short on Friday night on their quest for that three hour drive to Oxford in December, a perfect season and a 3A title.  West Marion (13-1) did just enough, sending the visitors home with a 12-8 win over the Indians.

Hazlehurst took the kickoff from West Marion to start the game.  The Indians came up short and had to punt the ball away.

Both Hazlehurst and West Marion traded several possessions, as neither could get a successful drive going.   The defenses stood their ground respectfully, not allowing either to move the ball much.  At the end of the first quarter the score was 0-0.

With 7:20 left in the second quarter Hazlehurst was finally able to score after JaQuaveon Tillman intercepted the ball.  Quarterback Ladarrius Williams ran the ball in on a second-and-goal with the ball on the 1 yard line.  The 2 point conversion was no good.  The Indians were in front 6-0.

West Marion finally scored with 8 seconds left before the half.  Their 2 point conversion attempt was no good.    At the half with the score tied 6-6.

West Marion received the kickoff to start the third quarter and was not able to get a drive going.  They had to punt the ball away.

The Indians were unable to convert their drive into points and punted back.

The final touchdown of the game came with 34 seconds left in the third quarter. West Marion’s Noland Miller scored a touchdown.  The two-point conversion was no good, but the Trojans led 12-6.

West Marion kicked off the ball to Hazlehurst, and the Indians fumbled the ball.  West Marion recovered.  This seemed to be the breaking point of the Indians.

West Marion went on offense to start the fourth quarter and took control of the ball and the clock the rest of the game.  Hazlehurst did manage to get a safety late in the game when West Marion was trying to run time off the clock.  The Indians could do nothing with the ball with 16 seconds left, and West Marion took the win.

After the game Coach Todd had this to say “I’m proud of my Hazlehurst Indians tonight they showed heart, pride and determination.  I can say I really enjoyed coaching this group of kids,”  McDaniel said. “We came up a little short on the scoreboard, but not in character.”

Hazlehurst finished the season 12-1.  West Marion faces Collins in the south state 3A championship on Friday.