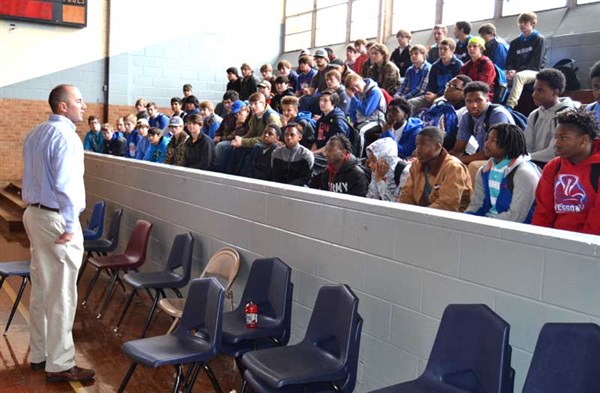 Wesson athletic director Ronald Greer called a meeting of high school athletes in the old gym at Wesson Attendance Center on Friday morning to introduce the Cobras’ new football coach.  Greer, who just stepped down as the football coach after last season, said that he is excited and happy to bring in Jeremy Loy.

Loy, a native of Natchez, Miss., has been serving as offensive coordinator for the Brookhaven High School Panthers for the past few years.  He has served in the same or similar capacity at several schools prior, including Franklin County, Mendenhall, Tupelo and Vicksburg.

“We are going to be a team that puts faith first, family next and football third,” Loy told the group of about 60 athletes.  “We are going to work hard every day to get better as men, as students and as players.  Win or lose, teams are going to know that the Wesson Cobras play hard, play tough and will not quit,” Loy continued.

Loy is married and has three children who will be enrolling in elementary grades next fall.

All personnel actions in the district are subject to approval by the Copiah County School board.

(Read more in the upcoming edition of Copiah County Courier)