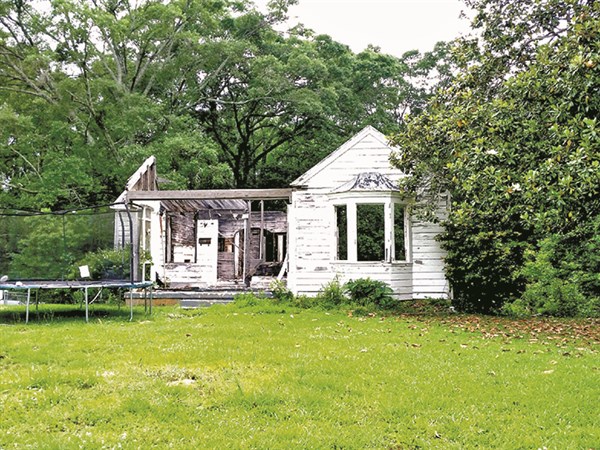 FIGHT THE BLIGHT – This structure on Jackson Street was damaged in Hurricane Gustav several years ago, yet remains in disrepair and is a danger to public health. The city is working through a list of these type properties in town, taking action on three at the recent board meeting.

The Hazlehurst Board of Alderman and Mayor Henry Banks met May 3 with Ward 2 Alderman Ron Sims absent.
Property at 125 Hillside Drive has received no bids, so at the direction of City Attorney Olen Bryant, the Board authorized Mayor Banks to negotiate a sale. A bid of $800 to raze property at 225 Carlisle was accepted. A clean up order for 133 Jackson Street was approved. Attorney Bryant will coordinate notification of code violations by mail as part of the code enforcement effort. Alderman Ricky Akin suggested that the Mayor and Board Attorney fully enforce the zoning ordinance to respond to several issues that have come to light.
Two lifeguards have completed the course and been hired; three more are needed.
Mayor Banks outlined his plan regarding the use of the Carlisle Street Ball Park. Neighbors have complained about the basketball court being in use and the lights being on later than ten p.m. The Mayor will personally pay for the lights to be on until 10:00 p.m., providing the park closes at that time and everyone leaves the premises. If not, the park will close at an earlier time.
WGK engineer Kevin Hines presented a change order request for $7348 to tie into a misaligned manhole with a 90’ directional bore at the sewer for the new hospital.
Representative Greg Holloway, Dist. 76, summarized his efforts the past year in securing funding for various projects for the city and county, including a $100,000 bond for the Lake Hazle dam repair, with the remaining $201,251 coming from the Delta Regional Authority; an additional $100,000 for the Millsaps Hotel project; and $150,000 for erosion control at the Police Department through Congressman Bennie Thompson’s office and the Natural Resources Conservation Office. He thanked the Board for their leadership and collaboration providing timely documented and detailed requests.  He also praised Ward 3 Alderman Shirley Sandifer for her proficiency in making certain monies are received and disbursed in a timely manner.
Police Chief Byron Swilley requested to hire Brandon Runyan as an uncertified police officer. Runyan is presently a full time fireman and will move to part time. Fire Chief Chris Pendleton asked that Gary Meadows be hired as a certified full time fireman. Chief Swilley noted that Homeland Security has reimbursed his agency $15,000 for the purchase of the new radios.
Water Department Head Jason Hilliard requested approval of emergency repair of Well #4 near Shady Grove. A bid of $38,925 from Lane was accepted by the Board to replace that well.
Alderman Sandifer presented a resolution to be published in the paper regarding employment at the new hospital to benefit low to moderate income applicants.
Discussion about placing of speed bumps continued, with other locations being considered. Pros and cons were noted, but no action was taken.
Temple Church of Christ Holiness will conduct a Health Fair at the Pavilion in downtown on May 21. Surrounding streets will be blocked off. Contact Rev. Stanley Virgil for details.
The Mayor and aldermen  will attend the Mississippi Municipal League annual meeting June 26-29 in Biloxi. Chief Swilley will attend the Mississippi Association of Chiefs of Police June 20. Bob Freeman will attend the Building Inspector conference July 10-15.
After approving claims, the Board adjourned until the next meeting, June 7, at 6 p.m. at City Hall.  The public is encouraged to attend all meetings.