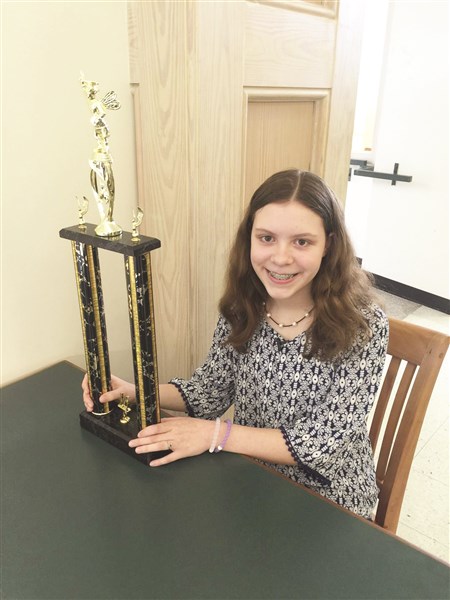 HEADING FOR WASHINGTON – Sarah Spencer of Hattiesburg, granddaughter of Mr. and Mrs. Johnny Armstrong of Hazlehurst, is on her way to Washington, D.C. to participate in the national spelling bee May 22-27.

HATTIESBURG, MS – Seventh Grader Sarah Spencer is an avid speller. She is a student at Presbyterian Christian School in Hattiesburg.
She competed in spelling bee competitions in the past, but now she will represent her home state of Mississippi in the Annual Scripps National Spelling Bee in Washington, D.C.
“I’m just kind of amazed that I’m actually going and I’m going to be in that Bee, it’s going to be so much fun meeting all the people there,” Spencer said.
On Tuesday, March 15, Spencer competed in Jackson against 25 other students across the state.
She spelled the championship word “Linger” in the 50th round of the bee.
Spencer practices from a list of nearly 1,200 words.
“For a higher bee, you have to know roots and stuff and rules of languages, and learn so much because you’re naming all these words and naming all these things you didn’t know,” Spencer said.
The daughter of the late Jay Barton and Sarah Spencer of Haittiesburg, and granddaughter of Mr. and Mrs. Johnny Armstrong of Hazlehurst, she said she has a solid strategy.
“I just picture the word in my head and try to say each letter and get them in the right order,” Spencer said.
Spencer studies with her coach Mr. Bonner and her mother Sarah Spencer.
“Sarah is a very independent student and a very hard worker,” Sarah Spencer said. “She studies very hard on her own. I sometimes call out the words, it’s actually pretty rare. She’s got a great work ethic.”
The Mississippi Association of Educators (MAE) and the Mississippi Public Broadcasting sponsor the state competition. MAE will fund the expenditures for Spencer.
Bee Week 2016 will take place May 22–May 27, 2016. The onstage rounds of competition take place May 25 and 26, 2016, in the Maryland Ballroom within the Gaylord National Resort and Convention Center in National Harbor, Maryland. Admission to the onstage rounds of the 2016 Bee on May 25 and 26, 2016, are free and open to the public on a first-come, first-served basis. Visit www.spellingbee.com for more details.
Live updates and results will also be posted in real time on May 25 and 26 via Twitter at @ScrippsBee and using the #spellingbee hashtag.  ESPN’s family of networks will broadcast the bee.  Check local listings.
Courtesy of WDAM in Hattiesburg.
Posted in News